HISTORIC TIDBIT...
On February 1, 1917, the people of Marion decided that the city should have a park to be used as a campground for overnight visitors. Three years later, this became the main function of Thomas Park, which was purchased for $4,500. School children took up collections to help with the purchase of 13 acres.

Richard Thomas was the original owner of the land. In 1840, he established the first sawmill in Linn County; he lived on this land until his death in 1892 at the age of 110. His daughter was one of the Park's main supporters.  When she was asked to name the park, she requested that it be named after her father. Later she gave a millstone from her father's mill to be embedded in the fieldstone columns at its entrance. Even today you can see the original columns still standing after so many years.

Today the adjoining Legion Park and Thomas Park includes 50 acres for enjoyment of the community. Marion's newest park is located east of Highway 13 and south of Highway 151, adjacent to the 184-acre Marion Enterprise Center. In 2015, local resident and developer Waldo Morris donated 7.4 acres of land to be developed as a city park. A large rock on the property was determined to be a glacial, granite rock deposited on the site from west-central Minnesota during the last Ice Age. Aptly named Waldo’s Rock Park, the project features the glacial boulder, a pond, 20-stall parking lot, pavilion with grills, loop trail, fishing pier, prairie grasses and a trail connection to the Grant Wood Trail system. The pond will be stocked in the spring of 2018 and catch and release fishing will be permitted until the habitat has time to become established. The park will provide unique learning and recreational opportunities for all ages. 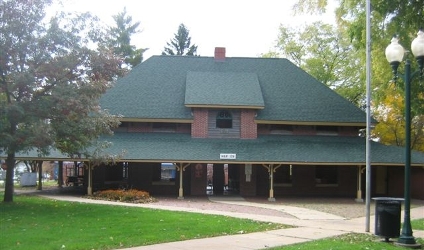 HISTORIC TIDBIT...
The  survey of the original town was made in December, 1839, when a public square was reserved, but it wasn't until 1926 that action was taken.  It would be known as the City Park.  Today City Park is a focal point for community activity.  The statue in the park, facing Seventh Ave. is of an unidentified Civil War soldier.  The statue is made of tin and was donated by the Iowa Woman's Relief Corps, Marion, Iowa, Robert Mitchell WRC No. 126.  The rood of the "depot" was the roof of the old Milwaukee Road railroad depot in Marion.  It was moved to the park in 1989-1990.  The roof, portico, and much of the brick work from the 100-year old building were removed to be used for the pavilion in City Park. 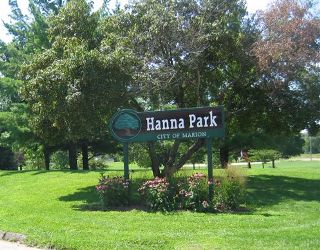 HISTORIC TIDBIT...
It was established in 1976, named for Harold Hanna (1912-1973), a long time Marion resident who served as a park board member for 30 years.  Hanna's daughter, Lois Foster, was also a park board member for 16 years.  The land had been owned by the Marion Independent Schools.  In 1965, the Marion School Board sold the land to the City of Marion after deciding not to build a school on the property.

All Inclusive Playground, restroom, and open air shelter, located in the center of Lowe Park, has it's own address and separate driveway  - 4401 Irish Drive

HISTORIC TIDBIT...
The land was originally the town landfill.  In the early 1960's, the land became a park and was known as Storybook Park. The flower bed at the Second Street entrance is planted and maintained by members of the Friends of the Marion Parks.

HISTORIC TIDBIT...
Butterfield Park was dedicated in August, 1999.  The land is leased from the Lutheran Church of the Resurrection.  The park is named after Joe Butterfield, who was the Marion Parks Director from 1975-1996.

HISTORIC TIDBIT...
Ascension Park was the result of cooperation between Ascension Lutheran Church and the City of Marion in 1996 to provide a neighborhood park of approximately eight acres per a long-term lease agreement.  In addition to the installation of playground equipment, in 2006 the City of Marion assisted Ascension Lutheran Church with the improvements made to the shared parking lot.

HISTORIC TIDBIT...
The park and road are named after the Boyson family, who originally owned most of the land. 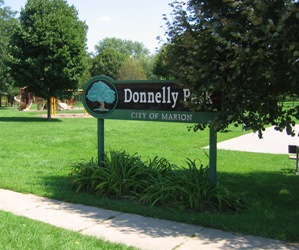 HISTORIC TIDBIT...
In October 1998, the City of Marion and the Marion Water Board finalized an exchange agreement with Mr. and Mrs. Curt Gill for the dedication of approximately six acres of land for park and recreation purposes and a well and pumping station.  In exchange for the transfer of park land, the City of Marion extended a sanitary sewer on Tenth Street.  The park was named to honor Curt Gill's grandfather, the original owner of  the land.

The Marion Parks Department was successful in its application to Iowa Department of Natural Resources Recreation Infrastructure Grant Program and received $38,347 for the park.  With the addition of City of Marion matching funds, a gazebo, playground equipment, ball field, sign and walking trail became  a reality in 2001.

HISTORIC TIDBIT...
Named after form land owners Dayton and Olive Lininger. It was purchased by the City of Marion in December, 1970.

HISTORIC TIDBIT...
Built in 1993 and home to the Marion girl's softball leagues.  Named after Peg Pierce, a long-time Marion resident who started the softball program in 1984. The league played at various school and park locations until the new park was built.  The Parks Department used surplus funds from the swimming pool and federal grant for youth programs to do the grading and seeding of the complex. The league had many fundraisers to pay for fencing, backstops, bleachers, and concrete. "The league probably put $160,000 to $180,000 into the ball park," Peg said. The playground was added in 2004, when the league raised another $15,000.  Another $25,000 was raised for parking lots. 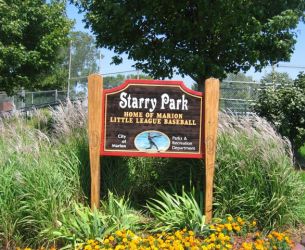 HISTORIC TIDBIT...
The smallest park in Marion, situated on a city lot.  It was leased from the Marion Independent School District in 1981 for 99 years, at a cost of $1 per year.  The property was originally part of the old railroad tracks.  The park was dedicated on Nov. 12, 1981, and is named for Elza Mentzer.  The Mentzers were a prominent Marion family.  Benjamin Mentzer was the son of a building contractor and built a house on Eighth Ave. in the 1890's.  Elza graduated from Marion High School in 1875 and was the father of Gretchen Mentzer, a long-time Marion school teacher.

This three-quarter acre park is maintained by the Marion Water Department.

HISTORIC TIDBIT...
The land was originally owned by Hazel J. Merrill, whom the park is named after. The Water Department purchased the land in 2004 with the agreement to maintain the flora and hardwood trees already there and keep it for public use. Since then, additional flower beds and a gazebo have been established there and today it is used for small weddings, gatherings, and photo opportunities.