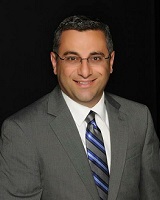 Nicolas AbouAssaly is serving his second term as Marion's mayor. He was appointed to Marion City Council in June 2013 to fill a six-month vacancy in Ward 4. He was re-elected to the position the following November. He was elected mayor in Nov. 2015 and re-elected in Nov. 2019.

Mr. AbouAssaly is a partner at the Simmons Perrine Moyer Bergman law firm in Cedar Rapids and is very active in the Marion community. Prior to serving on the City Council, AbouAssaly was a member of the the Planning and Zoning Commission, the Uptown Marion - Iowa Main Street Community Board of Directors, and numerous community committees.

He is an advocate for progress in Marion and the region.