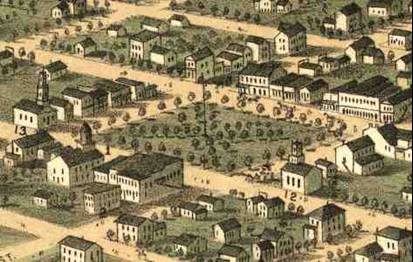 Marion is unique in that it was founded and platted as the county seat of the new Linn County before anyone actually lived here. Surveyed in November 1839, lots went up for public auction on December 6, 1839. Marion quickly became the business center of the county and by 1855 had a population of 1,500.

19th century business centered around City Square Park. The park still serves as a hub of activity, but business and manufacturing have spread well beyond this beginning.

By the early 1850’s, it was obvious the railroad was the transportation of the future. On October 13, 1864 the railroad steamed into Marion. Over the next century, Marion would be an important railroad hub for the Milwaukee and St. Paul Railway, later known as the Milwaukee Road. In 1887, Marion became a Division point for this railroad with a roundhouse plus additional business offices which needed a new depot. It was placed adjacent to the business district.

Marion has always been a family-oriented community. A school and churches were established even before permanent homes and business structures were built. As the community grew, new schools were built. Today there are two large school districts in Marion, both noted for their academic excellence. Marion is also the home of Keith Vawter, the founder of the Chautauqua Circuit, a very popular adult education movement of the late nineteenth and early twentieth centuries.

City parks were added as the footprint of the city grew. Today Marion's Parks and Recreation Department maintains over 600 acres of public ground with a combined total of 41 parks and green spaces. City Square Park is home to the nationally-acclaimed Marion Arts Festival each summer, as well as concerts, farmers' markets and numerous other family-friendly activities. Lowe Park has ongoing art exhibits, is the center of senior adult activities, and is home to the newly-dedicated Klopfenstein Amphitheater for the Performing Arts.