Marion Well-Being Rises for Second Year in a Row 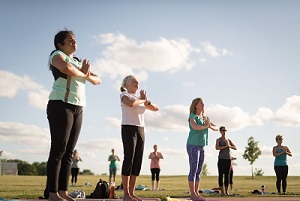 An investment in community well-being seems to be paying off in Marion, as the latest Gallup-Healthways Well-Being Index® report shows a citywide gain of more than four points in overall well-being and an increase in each of the five elements of well-being. The study was conducted in the fall of 2016 as part of the city’s efforts surrounding Blue Zones Project®, a community-led well-being improvement initiative that focuses on changing the environment around us to make healthy choices easier.

The Well-Being Index is a scientific survey instrument that measures, tracks, and reports on the well-being of individuals and organizations. Gallup conducted the survey during a four-week period beginning September 23, 2016, nearly two years after Blue Zones Project officially kicked off in Marion.

The city’s overall Well-Being Index score rose 4.4 points, or seven percent, from 61.8 in 2014 to 66.2 in 2016. The city’s overall well-being score of 66.2 is well above national and state levels. The city also saw improvement in each of the five elements of well-being: purpose, social, financial, community and physical well-being.

Obesity is down 19 points, a drop of nearly 55 percent since 2014. Obesity now sits at just 16.0 percent, well under both national and state levels. Smoking levels dropped one point, sitting now at just 8.6 percent of residents.

“We are encouraged by our Well-Being Index results, which show movement toward increased well-being among residents across the city,” said Sara Mentzer, Marion Blue Zones Project coordinator. “We know there is more work to be done, and thanks to a strong network of community partners working toward the same goal, we believe we will continue to make strides in our efforts to improve the health of this community.”

“Marion is committed to adopting meaningful health and well-being improvement initiatives for residents,” said Marion Mayor Nicolas AbouAssaly. “When the Gallup-Healthways Well-Being Index study shows gains in all five elements of well-being – and reveals that 80 percent of residents feel that Marion is the perfect place for them – we know we are on the right track.”

Since Blue Zones Project Marion kicked off in January 2014, nearly 8,000 individuals have taken the Blue Zones® Personal Pledge for better well-being. Marion counts 37 Blue Zones Worksites®, 11 Blue Zones Restaurants®, three Blue Zones Grocery Stores® and 10 Blue Zones Schools®—all of which have optimized their environments to help make Marion one of the healthiest cities in the nation.

About Blue Zones Project
Blue Zones Project® is a community-led well-being improvement initiative designed to make healthy choices easier through permanent changes to a city’s environment, policy, and social networks. Established in 2010, Blue Zones Project is inspired by Dan Buettner, a National Geographic Fellow and New York Times best-selling author who identified five regions of the world—or Blue Zones—with the highest concentration of people living to 100 years or older. Blue Zones Project incorporates Buettner’s findings and works with cities to implement policies and programs that will move a community toward optimal health and well-being. Currently, 37 communities in nine states have joined Blue Zones Project, impacting more than 2 million Americans. The movement includes three beach cities in California; 15 cities in Iowa; Albert Lea, Minnesota; the city of Fort Worth; and communities in Hawaii, Southwest Florida, Wisconsin, and Oregon. Blue Zones Project is a division of Healthways, a Sharecare company. For more information, visit www.bluezonesproject.com.

About Marion
Marion is one of the Midwest’s fastest growing cities. Located just minutes north of Cedar Rapids, Marion prides itself on being the best place in Iowa to raise a family and grow a business. Reach higher and achieve more in Marion. Visit www.cityofmarion.org to learn more.